Our beautiful Lydia joined our family two weeks ago, but it feels like she’s always been a part of our little family of five. Her quick entrance into this world, however, left us in a bit of shock, disbelief and filled with joy. It’s a raw, messy, redemptive story and I’m excited to share our homebirth with you.

Why we chose a homebirth

Most people think choosing a homebirth is a little crazy, but given the option I will absolutely do another one! For this pregnancy our first choice wasn’t actually a homebirth, it was to be at a birthing center on the floor of one of the local hospitals. When I was around 20 weeks pregnant we learned the birth center would be closing, before my due date, simply because the hospital it was attached to decided that it wasn’t making enough money to keep it open. To say I was in shocked and upset is an understatement – I was halfway through my pregnancy and had no idea where I was going to deliver, Rob was deployed and my options for a non-hospital birth were extremely slim. After a lot of prayer I decided I wanted to go the homebirth route — now I just had to convince Rob which didn’t seem like a small feat.

He was very hesitant about it, until we spoke about what he was nervous about and his response was “Katie, I have no idea how to deliver a baby or all that other stuff. It’s just not my area of expertise. I’m sorry” Sweet man. To him a homebirth=a birth completely unassisted. I explained that the midwives would come to our house, bring all their medical supplies and knowledge, as well as handled any clean up and he wouldn’t have to sleep on a hospital chair. His response was “Well that sounds extremely convenient, let’s do that then!” Little did either of us know what was going to take place on her birth day!

We arrived back home after hitting up a couple yard sales the morning of her birth and I was exhausted. My 41 week and 3 days pregnant self climbed back into bed, prepared to fall asleep while watching an episode of “Friends” but few minutes later I started to feel a contraction coming on. “There is no way this is the real thing or if it is it’s just the beginning.” I told myself but I opened my phone anyway and sent a message to my doula and midwives just to give them a heads up. They quickly replied that I should get into the tub to see if hot water could confirm it was real (contractions speed up) or false labor (they slow down). So I got up off my bed to begin filling the tub and then ducked my head out the bedroom door to give Rob a heads up and say that he may want to let Casey know just in case. Steam began to fill the room and prayers filled my heart as I asked for protection, guidance and to let it (finally) be the real thing.

I stepped into the now full tub and sank with relief into the warm water. Another contraction wave washed over me and I focused on relaxing every part of my body. After a few more waves I sent a screenshot of my contractions to my midwives and doula, letting  them know that the warm water was consistently speeding things along. Rob came into check on me and I told him everyone was on their way over. I couldn’t speak through the contractions and didn’t want to be left alone, so he pulled up a chair next to the tub and started to play some calming music.

I leaned on the edge of the tub, just swaying and relaxing my body as best as possible. “Lord guide me, protect us both, give me the grace to endure and your will be done through it all” – I prayed and worshipped silently all the while.

After a few moments I no longer wanted to be in the tub. I climbed out, towel dried off and began walking towards my bed. I grabbed a chuck pad from my birth kit supplies and laid it on the floor next to my bed. Another contraction came as I knelt down to lean on the side of my bed. “Deep breath; nice and slow, don’t forget to breathe” I kept speaking over and over in my thoughts. The waves of pain kept coming. I didn’t sink beneath them, just prayed and breathed through them. After Rob walked back from the bedroom door, he knelt beside me and held my hands. He was silent, which is exactly what I needed, just quiet strength. I squeezed his hands through the contractions, though not uttering a word myself. Finally my body began to involuntarily push, despite my doubts that it was time. Pushed through one contraction, I breathed deeply for the 15 second pause and then pushed one last time.

Rob was still clutching my hands and since I was unable to speak, he didn’t realize that I was pushing through those contractions. Little Lydia fell the short drop on to the pad on the carpet. I quickly scooped her up and she let out a sweet little wail to say that her lungs were clear. Rob had a stunned look on his face and then started to just laugh and so did I. He got up to grab her a towel so that she wasn’t cold. We sat on the floor snuggling her and just looking at each other in disbelief.

About 5 minutes later our bedroom door swung open and two midwives quickly rushed in, their hands carrying any medical equipment that could possibly be needed (but wasn’t). They knelt on the floor next to me and just laughed saying “Well we all knew your labor would be quick, just didn’t think it would be that quick!”

They helped get me up onto the bed where I would be much more comfy to be checked over. A couple minutes later our bedroom door swung open and my doula came rushing in, only to turn her excited smiling face into a look of disbelief when she realized baby was already here!

There was so much laughter, smiles and excitement in that room! Lydia was here, we were both recovering beautifully and everyone was getting some baby snuggles.

Lydia weighed in at 6lbs 7oz, such a tiny little thing for being over 41 weeks! She was tiny but perfect and we are overwhelmingly grateful.

Rob snuck Lydia out to meet the kids while my midwife Renee helped me to take a quick refreshing shower to get cleaned up. My belly felt so soft and different now that it was no longer a safe haven for her; it was miraculous how the Lord used my body to form and nourish that sweet baby.

I got dried off, put my jammies back on and crawled back in bed. While I showered my other midwife, Lindsay, bustled around our bedroom. She scrubbed the tiny amount of blood that had gotten on our carpet, washed any and all blankets and put fresh sheets on the bed. My sweet doula, Rebecca, graciously deflated the birth pool that she had lent us and gave a helping hand wherever I needed her.

Rob brought Lydia back in and my dear friend Casey popped in to say congratulations before she generously took my kids back to her house for a few hours.

Casey and I had been pregnant together last summer/fall and our due dates were a week and a half apart. Her son’s milestones serve as a marker for me of where our angel baby would have been had the Lord not called them home so early. The sting of miscarriage lessened as I held our newest little babe and I rejoiced that the Lord allowed Casey’s little one to be in our lives as a reminder of the baby we lost; if not, I would be prone to forgetfulness of the missed milestones and I would never want that baby to be forgotten. To have Casey and baby Ben there the day Lydia was born was such a comfort to my heart. It felt like the Lord was showing me that He saw my pain through that season but reminded me that He was holding that little baby in His perfect arms rather than mine. Both grief and joy filled my heart that day – death is tragic but life is precious and worth rejoicing over no matter the circumstance.

Casey and all the kiddos headed out – my sweet friend, whose husband was deployed at the time – graciously kept all FOUR kids solo. She is an absolute saint and we are so grateful for her heart to serve our family!

Not too long after Casey left, so did my midwives and eventually my doula. Rob and I sat snuggled on our bed with little Lydia talking about how fast but smoothly the entire day went. Praise the Lord He directed us to a home birth because there would have been absolutely no way we would have made it to the birth center (previously 30+min from our house) and to have a baby in the car, side of the road or to call EMS would have been less than ideal as well as a little scary. He knew what Lydia’s birth story would be like and graciously pushed us in the direction that He knew would be best.

I'm wife to my best friend, mama of three littles here on earth and one up in heaven. I'm passionate about homemaking, books, theology, fostering imagination in my babies and cultivating community wherever the Navy sends us! God has called us as believers to love others well and to let iron sharpen iron (Proverbs 27:17) so that we may encourage and build each other up in Christ. So welcome to the Humble Motherhood village, I'm so grateful you're here! View all posts by Humble Motherhood 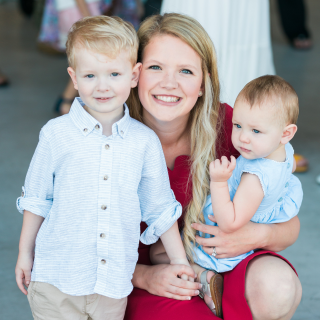 I'm wife to my best friend, mama of three littles here on earth and one up in heaven. I'm passionate about homemaking, books, theology, fostering imagination in my babies and cultivating community wherever the Navy sends us! God has called us as believers to love others well and to let iron sharpen iron (Proverbs 27:17) so that we may encourage and build each other up in Christ. So welcome to the Humble Motherhood village, I'm so grateful you're here!